Up ahead, you see a massive grey animal. It has very little hair, small eyes and a long trunk for a nose. An elephant, of course. But do you know the difference between African and Asian elephants?

Here are the basics:

African elephants (Loxodonta africana) evolved to survive the hot sunny savanna conditions, which is most obvious in their huge ears that they flap to cool the blood running through them, which cools their bodies. [Forest elephants in the Congo Basin rain forests of Central Africa are smaller and may be a separate species from savanna elephants of eastern and southern Africa, but experts are still debating this.]

Asian elephants (Elephas maximus) spend much more time in forests, where big ears to cool off are not only less critical, but could be a hindrance when trying to walk among the tree branches. So how does their two-humped forehead help them in their relatively wetter and cooler surroundings?

And what about their skin?  African elephants have looser, more wrinkly skin. Is that another adaptation to thriving in hotter, drier environments?

Here are some photos:

The Asian elephant's head is the highest part of the animal, as she holds her head at a 45 degree angle to the neck, whereas African ellies have necks that are held nearly horizontally.

The jaw (particularly the upper jaw) in African elephants, especially bulls, is larger and more pronounced, to accommodate the development of their immense tusks. Those are the same tusks that encourage people to kill them to make jewelry and other unnecessary decorations.


Most African elephants, of both sexes, have tusks, whereas most female Asian elephants do not have them. Tusks are large incisor teeth that grow throughout the animal's life, at roughly 15-18 cm per year. They don't fall out, so ivory comes primarily from elephants that have been killed for it (and and around one quarter of the tusk remains inside its socket, which is why poachers carve it out to remove it).

So please don't ever buy ivory. Save an elephant and make your money work for them, not against them!

And what about those trunks?  All elephants use their trunks to smell, and their sense of smell is outstanding. Trunks are actually a combination of nose and upper lip, as well as, of course, a great grabber of food and other items.  I have watched elephants in a Botswana research camp pick up up small fruits (1-2 cm across), one at a time, with ease. The fruits were sweet, so perhaps it resembled people picking up Tic-Tacs or other mini-candies.

African elephants have two lobes, or fingers, on the end of their trunks, similar to our opposable thumb!

Asian elephants have just a single lobe at the tip of their trunks, so I wonder if they are able to pick up small bits of food with the same ease. While African ellies can directly grasp leaves, fruits, and grasses before bringing them to its mouth, their Asian cousins use their single finger to curl around food, which they then squeeze up into their mouths.


So, based on all this, can you tell which species this is on the left?  And on the right?


The key to watching any elephants is respect. They are all huge. And they own the road, regardless of species! 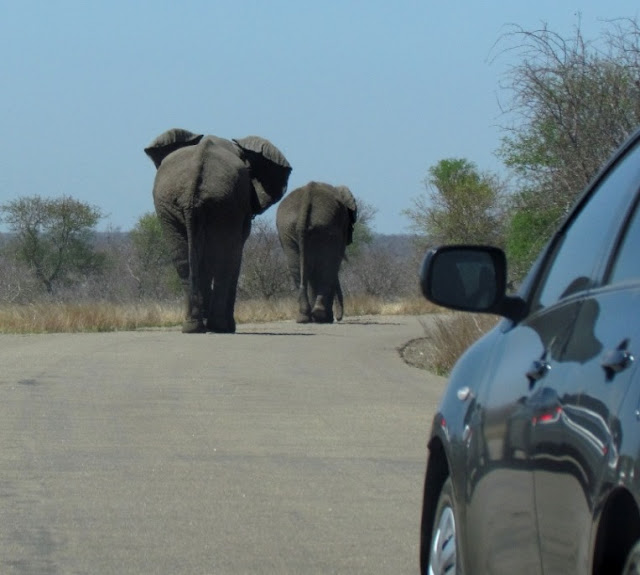