Can music really help our workouts?


As New Year's resolutions start to fade, are you trying to motivate your tired self to get to the gym, track, or aerobics studio but not looking forward to it?

Wondering if some upbeat (or bad-ass) music will make that dreaded workout pass by more quickly?

Might listening to your favorite tunes help you overcome your frustration at feeling out of shape enough to go to the gym?

Curious whether tunes at a faster tempo could actually make you run faster?

If you answered Yes to any of these, you'd be right!


Scientific studies (more than I'd realized!) over the last 10 years have shown that listening to music affects our workouts in several ways -- enough, in fact, for USA Track and Field to ban in 2007 portable music from marathons and other competitions.

That was not a popular policy At. All. And the rule was amended the following year to prohibit the use of music only by competitors in the running for prizes. You just need to look around a gym or jogging path to see how much people love their portable music, but how does music actually help us through our workouts?


Yep, music affects us physically -- people tend to synchronize their movements to the tempo of the music they're hearing. Keeping the tempo with your body may help you use energy more efficiently. The beat helps us keep a steady pace without having to count or concentrate as much, and research suggests that moving in sync with music is physiologically more efficient than not.

What is the ideal pace?  Some psychologists have suggested that we humans have an innate preference for rhythms around 120 beats per minute (bpm), or two beats per second, though most people running on a treadmill seem to favor music around 160 bpm.

In a 2009 study, male university students pedaled stationary bikes on 3 occasions, while listening to music at normal, slightly faster, and slightly slower tempos. In each of 3 trials, the scientists measured how fast they guys pedaled, how hard they worked (resistance counts!), as well as how far they rode, as well as how hard they felt they worked, how hot they felt, their heart rate, and how much they liked the music.

The participants pedaled harder and faster and logged greater distance when they listened to their selected music set at a 10%-faster-than-normal tempo. They enjoyed the faster music more, and they not only worked harder with it, they knew they were and were happy to keep it up.

The opposite happened for all these responses when they heard the music slowed down by 10% - and they even liked the (same) music less at the slower tempo.

Distracting, yet Focusing us too


Foremost for many people, though, from beginners trying to start a new regime to exercise addicts, is music's ability to distract us from the pain, fatigue, and boredom that can accompany some workouts. That's because music affects us psychologically, as well as directly physically.

"Given that exercise is often tiresome, boring and arduous, anything that relieves those negative feelings would be welcome," explains Costas Karageorghis, who has researched this subject for nearly 20 years.


After exerting ourselves for awhile (amount of time depends on each person), our bodies start to signal that we are nearing our fatigue limit, e.g. through pain or high heart beat. Music actually competes with our physiological feedback for the brain's conscious attention and can make us forget to be tired, for long enough to run a few more km, lift a few more reps, or shoot a few more hoops. So it can actually help us increase our endurance by making us forget how much we've done (or still have to go-- uf!).

Music is not magic, though. We cannot run 50kph (30mph) over time, regardless of how fast or motivating our workout music is.

The power of music to focus our attention on our workout and not on how tired we are is most noticeable during workouts with intervals or of moderate intensity. When exercising at an intensive level, our bodies' feedback ("Hel-lo?? Thighs are burning here! Can no longer lift the arms...") overcomes even really fast upbeat music.

Similarly, elite or professional athletes for whom the workout is particularly intensive and/or critical, music may not provide an edge, as they are usually already really motivated.

Nevertheless, even if we feel the fatigue of a high-intensity workout, music can make us feel better and less likely to give up. It can help us escape the present or our negative feelings - it's been linked to facilitating "flow" states in athletes, in which they feel totally focused and relaxed and best able to perform at their best.

It's even been shown to help alleviate choking under pressure by providing athletes with something to think about besides their upcoming performance.

If you're really dreading your workout, try some groovy tunes to get you going -- seriously, "groove" is the technical term here for "a musical quality that can induce movement in a listener," which can be rated (and was rated similarly in this study by musicians and non-musicians. "High-groove" music caused people to respond internally more than low-groove music or noise.

While faster songs with strong beats fire up most people, the actual type of music that makes each of us want to move varies among individuals but also among different cultures.


Emotional association is a third key element in music's effect on our performance. Songs that remind us of good times, old times, or that we associate with success or fun work better at helping us feel stronger for longer during a workout.

Emotion too -- I admit it, I went for a run as one of several breaks in researching and writing this post and was thinking about the songs I purposefully listened to. Those in which the singer sounds really passionate or sings something I really identify with motivate me even more than just the strong beat, so I think these might be the tunes to keep for the point in your workout that you most need help!  Do you agree?

It seems to be the case -- a 2009 study by Karageorghis and team showed that people walking on treadmills (not very stimulating on its own) performed better (faster, greater endurance to exhaustion, felt better) when listening to motivational music than neutral music or no music.

So music seems to combine a convincing psychological distraction with a physiological boost to our muscles to get us going on multiple levels.

Experts Karageorghis and Priest (2012) summarized their extensive research on the subject:

So grab your headphones and head out the door! 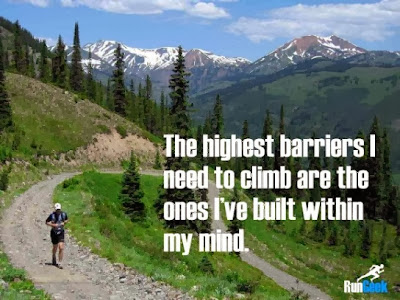