It's the unofficial beginning of summer in the United States this weekend, and people are headed to the beach, so I figured a post on jellyfish would be appropriate.

They're brainless, boneless, and bloodless, and they mostly drift with the currents, but they are apparently scheming to take over the seas.

And we are helping them do it, by messing with fish communities, ocean temperatures, and chemical composition of the water itself.


Overfishing is probably the biggest cause of increasing jellyfish domination. As people over-harvest sea turtles, tuna, swordfish, the giant ocean sunfish (aka mola), and the few other jellyfish predators, guess what happens?  The jellies grow out of control.

Jellyfish populations explode at the expense of their competitors - fish.

“When an ecosystem is dominated by jellyfish, fish will mostly disappear,” according to ecologist Sun Song, director of the Institute of Oceanology in Qingdao, China.

Christopher Lynam and coauthors of a 2006 study of the explosion in abundance of two jellyfish species off the coast of Namibia agree: “Ecosystem shifts from dominance by fish to dominance by jellyfish may be irreversible. ”

These researchers quantified what fishermen knew was happening: their intensive fishing of sardines, anchovies, and other fish was depleting stocks, and their annual catch had plummeted over the last 30 years. As the fish disappeared, populations of large predatory jellyfish grew in the absence of competition for food. The researchers worry that as more jellyfish eat more fish eggs and larvae off the Namibian coast, the system will not be able to correct itself.


With about 95% of their body made up of salts and water, jellyfish are like "the ocean brought to life". They collapse when stranded on the beach. Like other wandering organisms, they play a natural role in a variety of ecosystems - consumer of some species, dinner for others.

The ecological trouble jellyfish cause is due to their explosive growth and their ability to form huge blooms, or swarms, that can dominate an ecosystem. Swarms of jellies are thought to form in particularly favorable water conditions - the right temperature, salinity, and oxygen, with food plentiful and predators scarce.

They also create pain and havoc to human bodies and structures - their sheer numbers can clog tubes, pipes, coolant intakes at power stations, as well as bust up fishing nets. This is somewhat ironic, given how much we help to create favorable swarming conditions.


Cockroaches of the deep?


Jellyfish can grow quickly when food is available, and they can even shrink when it isn't, to reduce their energy demands.

What's more, they can live in Dead Zones – highly polluted areas in the ocean that have almost no oxygen and therefore can't support much in the way of marine life. Except jellyfish.

According to NOAA, "The size and number of marine dead zones—areas where the deep water is so low in dissolved oxygen that sea creatures can't survive—have grown explosively in the past half-century."

Human-caused dead zones tend to be near the coasts. Humans cause dead zones by dumping fertilizer, sewage, and other pollutants into the sea, which raises the levels of nutrients (nitrogen, phosphorus) and causes algae to bloom. The blooms deplete underwater oxygen levels as the algae respire, die, and decompose.

As the name implies, little survives in a dead zone. Jellyfish do, however. They "reproduce like mad, grow fast, eat most anything," and tolerate poorer water quality than other creatures. They are tough, says Anthony Richardson an ecologist at CSIRO Marine and Atmospheric Research in Australia— “like cockroaches.”

A female jellyfish can produce tens of thousands of eggs per day, and at the end of warm summer weather, male and female jellies will swarm together to increase the chance of fertilization.


What allows jellyfish to swarm out of control depends on the situation, but abnormally large swarms tend to reflect a stressed-out ecosystem resulting from people messing with it.

In addition to overfishing, human activity has created whole environments optimal for jellies. Oceans are warming, which most jellies prefer, and researchers worry that venomous species will expand their ranges to waters farther north and south of the Equator. Warmer waters also hold less oxygen and mix less frequently, so dead zones are more likely, given the same levels of pollution.

Jellies seem to manage even in highly acidic waters. As the oceans absorb increasingly more carbon dioxide and become more acidic, shells of mollusks and other invertebrates become weaker, but it sounds like jellies will do just fine.

Some scientists say we need more long-term study to tell whether the expansion in jellyfish populations and blooms is just part of a natural cycle or is really an increase. Jellyfish thrive in difficult conditions, reproduce quickly, and eat a variety of foods, allowing them to inhabit many parts of the oceans over the past 500 million years, but their populations do naturally multiply, then contract. 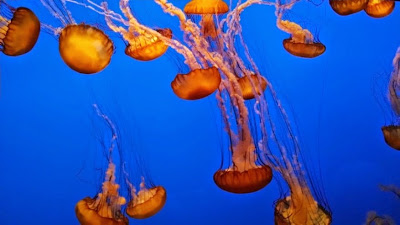 Ocean zones that have been hit by multiple stresses -- overfishing, overpollution, overwarming -- are where jellyfish tend to take over. Dead zones are reversible, but without conscious efforts to reduce the fishing and the nutrient load pouring into the water, highly stressed areas are unlikely to see fish return in the pre-industrial species and numbers needed to outcompete the jellyfish.

The ultimate effects of our reshaping the fish community, chemistry, and temperature of marine systems and how much these will benefit jellyfish populations are still unknown.