Did you know? 11 myths about colds and flu

It's cold here on the East Coast of the U.S., and I for one, am not a huge fan. No huge fan needed these days...

Winter cold means people, like me, all across the northern climates are huddling together indoors, taking the bus, car, or train to work instead of walking or cycling, and generally being near others, all of which increases the chances of coming into contact with germs, particularly for cold and flu.

We are mid-way through the flu season here, and the virus is still spreading.

If you've ever had the flu, you know how awful it feels, and it's likely that some of the advice you received from friends and family about dealing with the flu was wrong.

With all the misinformation and bad advice when it comes to dealing with the flu, here are 11 common myths you should consider:

Richness vs wealth, for plants and people

Why would poor soils and difficult environmental conditions lead to more, rather than fewer, plant species?  Or human cultures?

Once again, MinuteEarth gives us a fun and clear explanation of a great topic in this quick video:

Does this all make sense?

Not only the fish in the previous post, but other vertebrates, plants, and invertebrates, have antifreeze proteins that stop the growth of ice crystals inside the animal.

While fish in the Arctic and Antarctic seas need to protect themselves against temperatures of -1.9 degrees Celsius (28.5 degrees F), creatures that live on land may face colder temperatures.


A 2012 study showed that the larva of the fire-coloured beetle is an even more efficient anti-freezer. These little grubs can withstand temperatures down to -30 degrees Celsius (-22 degrees F) because their antifreeze proteins are more active than those in cold-water fish.

This study found that the antifreeze proteins in the beetle larvae also interact with adjacent water molecules, which improves the interaction with the ice crystals and, thus, the protection against the severe cold. Do not ask me how these interactions work.

Many of these cold-tolerant insects produce high concentrations of glycerol and other kinds of alcohol molecules that slow ice formation, so although the insect freezes, its cells are not damaged.  Other chemicals (called cryoprotectants) also protect cells when freezing and when thawing.

In fact, scientists have identified a number of different types of animal antifreezes, produced by a curious and haphazard variety of species, prompting some to suggest that this adaptation occurred relatively recently, in response to sea level glaciation.

According to molecular biologist Sean Carroll, "The necessity of avoiding freezing has truly been the mother of a great number of evolutionary inventions."

Not only that, but these antifreez proteins  developed separately in Antarctic species and Arctic species (10–30 million years ago and 1–2 million years ago, respectively).  Remember, species in these two communities are isolated and don't interbreed – it's a good example of convergent evolution.

Why (some) fish don't freeze

Early in a bike ride this cold January afternoon, I hit some hidden loose gravel under a big icy puddle on a bike trail and fell, soaking my feet, legs, and hands. Nice job, I know.

I decided to keep going, partly to accompany my companion and partly it seemed silly to just turn back, especially when the next few km were mainly up hill, so I stayed warm for most of the ride (except those cold feet!).

We humans can't survive more than about an hour submerged in icy water (and normally much less, due to exhaustion or blacking out). But what about all those crazy animals that live in the world's various frigid oceans?

You've got your polar bears and sea otters, with their thick, heat-trapping fur, and your pinnipeds (seals, sea lions, walruses) and cetaceans (whales and dolphins), protected by layers of fat, and of course penguins, who use both strategies.

And then there are the antifreeze artists, the animals and plants that survive freezing environments without the benefit of fur or feathers, using just the chemical composition of their body fluids.

Lose weight and save money by slowing down your food buying

Have you made any New Year's resolutions for 2015?

Do they relate to fitness?  Weight loss?  Eating better?  You are not alone.  Over 60% of people in the US do this, at least infrequently, me included (though I'm even behind on that this year!). 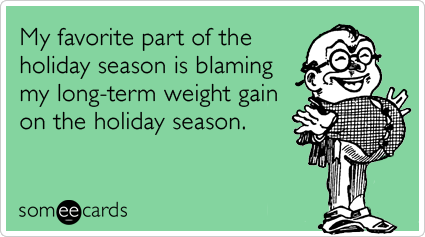 Losing weight is the most common New Year's resolution, followed by getting organized and spending less.