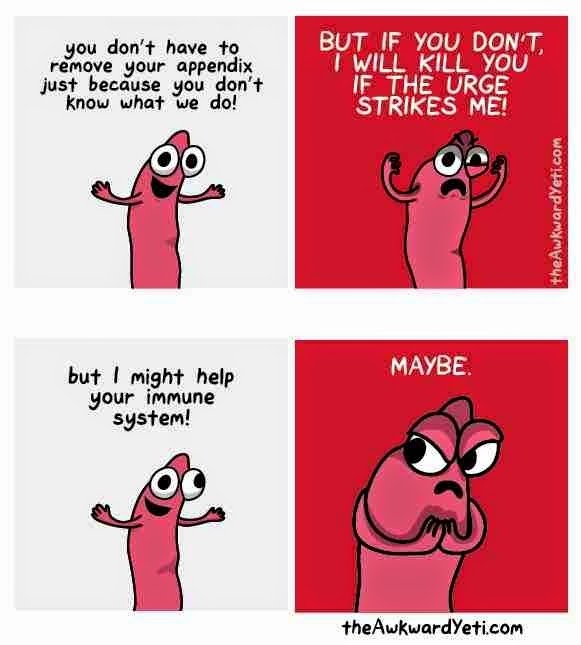 OK, how strange is it that 3 adult friends of mine have had to have their appendix removed this year?   [in the last 4 months?]

Two of these were ruptures that required emergency surgery and one just required relatively immediate, but planned, surgery.

All are as confused as I am by the sudden shock and of course grateful that they were in urban areas (Bangkok, Thailand and Baltimore, USA) with big modern hospitals that took them in, checked them out, and did the necessary surgery to save their respective lives.

Each is fine now, though they probably would not have been 300 years ago if that same thing had happened.

Is this a common occurrence? Apparently, more so than I'd thought. 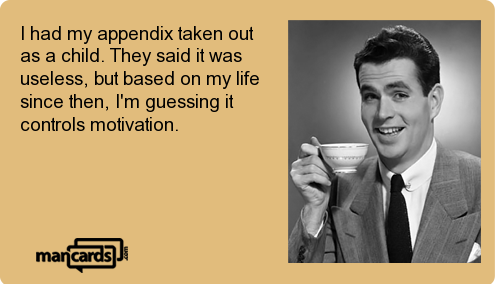 In the U.S., roughly 250,000 people are hospitalized with appendicitis (that painful inflammation of the appendix, alleviated mainly by surgically removing the appendix) each year.


So what's up with the appendix?


The appendix is a small organ in the digestive system, shaped like a 2- to 4-inch worm, that sits in the lower right-hand side of your abdomen, near where the large and small intestines meet.

It is a dead-end in the intestinal tract, next to the cecum, which stores the bacteria that helps cows and koalas digest the tough cellulose of leaves.

Doctors and scientists have debated the exact function of the organ for years and still don't know.

Some experts think the appendix is a now-useless piece of equipment from our evolutionary past, as it can be removed from people, like my 3 friends, with no noticeable symptoms or health problems.

Also, many mammals don't even have one, which has actually slowed understanding of the appendix, since much of our experimental medical research has involved the manipulation of individual animals of other species.

The appendix is similar to our numerous foot bones, curved spine, and wisdom teeth, in that these days it seems maladaptive to our ability to function.

Is it just a vestige of many millennia ago when our ancestors needed the help of wisdom teeth and helpful gut bacteria to chew and digest leaves and other tough plant foods? When they climbed trees and walked on all fours so used the many bones of a flexible foot and a different spinal design?

Each of these now can cause us pain; in the case of appendicitis, removal of the organ is necessary to save the person's life.

Our appendix suddenly becomes inflamed because it gets blocked by a foreign body, fecal material, or undigested food, becomes infected, and, if not treated, the walls of the organ can start to leak and eventually burst, throwing a ton of digestive waste products into your abdomen.

Appendicitis can be life-threatening. A common sign of a blockage in the intestine is sharp abdominal pain, especially if you had to throw up beforehand, so if you have that combo, take it seriously and see a doctor!

Other scientists, however, have proposed that the appendix plays several helpful, if perhaps not essential, roles in our daily functioning.

One theory is that the appendix acts as a storehouse for "good" gut bacteria, helping us maintain good health by supporting growth of "friendly" gut bacteria that help us digest food and allowing them to live safely until the body needs them. For instance, dysentery, cholera, or other diarrheal illness or a full course of antibiotics knocks down your gut flora population. After such a wipeout, the appendix helps to recharge ("re-inoculate") the digestive system with a new generation of these bacteria.

And we do need them, in part to help defend our guts against the sort of "bad" foreign bacteria that gave us the illness in the first place. 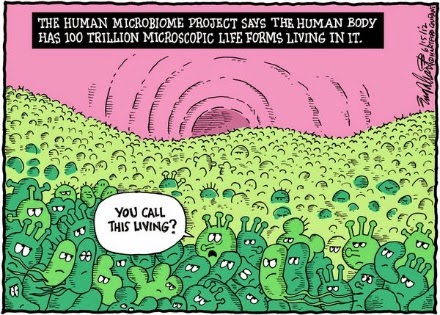 The appendix is also thought to have some immune function based on its association with the lymphatic system (which moves white blood cells to fight infections), but scientists don't yet understand it!

So far, they've found it helps to train white blood cells on what to accept and what to fight. It encourages growth of a type of white blood cell and production of certain antibodies.

By exposing white blood cells to the wide variety of foreign substances present in the digestive tract, it helps to prevent an overactive antibody response to food, drugs, or "friendly" microbes. This is likely why it successfully stores friendly gut bacteria. 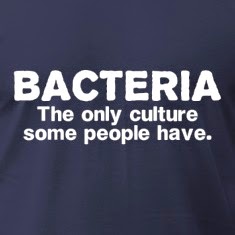 One interesting school of thought is that, with the better hygiene practices of modern society, we are in contact with fewer diarrhea-causing pathogens, making these good bacteria less necessary, which may explain why the appendix has gained a reputation as a useless organ.

Moreover, without a variety of gut bacteria on which to "train," the immune system might overreact to new gut bacteria and cause inflammation in the appendix (a.k.a. appendicitis).

Evolutionary changes happen as animals or people with certain traits contribute more offspring to the next generation, so those traits stay within the population. Similarly, if a trait lessens survival or reproduction, the people, animals, or plants that bear it will contribute less to future generations and the trait gradually becomes less common.

The trait of having an appendix seems to have been potentially helpful to human evolution, yet only about 50 mammal species in a study of 361 have an appendix. If it is quite useful, why isn't more prevalent? Or is it only now that we've cleaned up our act enough so that an entire organ is considered expendable?