Third-hand smoke: how to harm other people's health even after you die

OK, that's a little harsh. Third-hand smoke is how a smoker can harm other people's health while still living, even after she or he moves to a new house, changes job, leaves a bar, or even quits smoking.

I'd never heard of third-hand smoke until I read this release of a recent study, but it's scary. It starts:

"Do not smoke and do not allow yourself to be exposed to smoke because second-hand smoke and third-hand smoke are just as deadly as first-hand smoke, says a scientist at the University of California, Riverside who, along with colleagues, conducted the first animal study of the effects of third-hand smoke."

Yikes!  I learned several things from reading it, and they matter even if you don't smoke.


1. Second-hand smoke includes both the chemicals given off by the burning cigarette – the "side-stream smoke" – and the smoke exhaled by smoker.

2. Second-hand smoke can be nearly as toxic as directly-inhaled "first-hand" smoke (which is really bad for you) and so truly poses a health risk for the non-smokers.

It is especially harmful to the kids of smokers, who are less able to avoid it if a parent smokes in the home, car, etc., and who tend to have more ear infections, asthma, and lung problems (including pneumonia, bronchitis, and poor lung development) than other kids.

3. Second-hand smoke accumulates on surfaces (the sofa, car seats, rugs, dust, etc), where the toxicity of the chemicals actually increases over time. Nice. This is called third-hand smoke: it's the legacy that lives on after the smoker leaves, even if you open the windows or ventilate the room.

Have you ever walked into a bar during the day, and it smells like smoke, even though no one is smoking?

Or had to hold your nose while riding in a smoker's car, even if he or she isn't smoking? 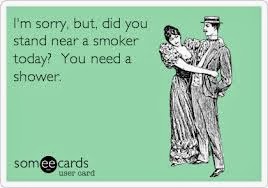 Or rode an elevator with a smoker returning to the office from a cigarette break outside? That is third-hand smoke you are enjoying. The absence of visible smoke is irrelevant, and it doesn't always smell.

The phenomenon of smelling yesterday's smoke today was named by doctors at MassGeneral Hospital for Children in Boston, US, and only recently. It describes the accumulated deposits of toxins, no longer visible, from smoking cigarettes in a space - the smaller and more enclosed the space, and the more cigarettes smoked there, the heavier the deposit, and the stronger the impact.

And smokers also take it with them -- the smokers themselves release the toxic particles, which initially cling to their hair and clothing but shake off with movement.

Again, kids bear the brunt of harm from third-hand smoke. Those small folks in your household that run around closest to the floor, touching everything, and putting fingers in their mouths are the same little tykes whose lungs, brains, and other organs need oxygen and an absence of poisons to develop properly.

If you smoke and hug your kids, you are treating them to toxins.

Which toxins? Lead, cyanide, arsenic, formaldehyde (remember biology class?), benzene, butane (used in lighter fluid), 11 strong carcinogens, and some 50 poisonous substances are all in smoke. It's legal and it's used globally, but it's still really bad stuff.


Since we can't see or sometimes even smell the residual particles from smoke, how do medical researchers know they are harmful?


They test it in mice, and they see it in humans.

The recent study exposed mice (mice so often bear the brunt of it) to third-hand smoke in conditions similar to how humans experience it. These mice showed changes to several organ systems:
This is the first experimental study of third-hand smoke, but earlier research on children has shown that kids living with one or more adults who smoke in the home (so second- and third-hand smoke are plentiful) miss 40% more days from school due to illness than kids who did not live with smokers.

It's yet another reason to stop smoking, even if you try to keep it away from your friends and family. The residual effects are only now being seen.