Smoking for fitness? Nah, the new news is old news

Male birds show off their bright colors, fancy feathers, and daring dances in order to catch the eye of the ladies, knowing fully well that they may also be attracting the attention of potential predators.

Animal mothers will take it even further, pretending to be hurt or charging a larger animal outright, in order to distract the predator from her den or nest.

Perhaps smoking cigarettes has a similar function -- it looks cool and may attract the attention of the ladies (or men), despite the overwhelming evidence that it is a potential killer.

Nevertheless, unlike the male bird of paradise dance behavior, smoking isn't universal and it certainly isn't necessary to attract a mate.


In the United States, there is currently a national debate on the dangers of legalizing marijuana (harmful or not, "gateway" drug or not), but, as columnist and former smoker Richard Cohen laments, we have not had the same sort of conversation about cigarette smoking, which is both legal and widely available in most countries. 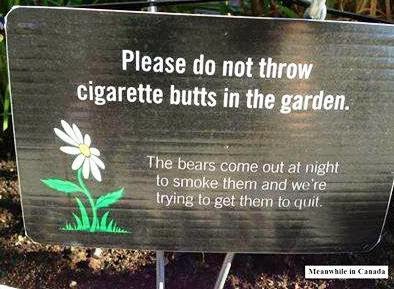 It's been 50 years since the first report released by the U.S. Surgeon General on the links between smoking tobacco and several deadly diseases (mainly heart disease and lung cancer).

The latest report provides further evidence of these links. It also expands the list of really unpleasant diseases that are caused and/or exacerbated by smoking to include various forms of cancer, stroke, infections, blindness, gum disease, higher blood pressure, and even wrinkles. That poison-in-a-stick potentially harms nearly every organ in the human body.

In addition to tobacco, which on its own is harmful, cigarettes contain over 3,000 chemicals, including ammonia, arsenic, lighter fluid, and carbon monoxide.

If there was ever a time to quit smoking, this is it. Cigarette smoking in the U.S. has declined from 42% of adults in 1965 to 18% in 2012, but it's increasing elsewhere: now, almost 80% of smokers live in low- and middle-income countries.

Despite the U.S. decline, the Center for Disease Control and Prevention estimates that over 440,000 Americans die each year from smoking-related illnesses, and worldwide, tobacco use causes more than 6 million deaths (600,000 of these are from second-hand smoke - how unfair is that?). Many more experience debilitating symptoms -- from the original lung and heart diseases to liver and colorectal cancer to Type 2 diabetes, to erectile dysfunction to vision loss and rheumatoid arthritis -- that cost an estimated $130 billion annually.

I know, if you are 17 years old, none of this will happen to you. Not now, maybe, but very possibly later.

The World Health Organization reports that tobacco "kills up to half its users", and the life expectancy of smokers is nearly 15 years less than that of non-smokers. As Cohen says, "Tobacco is about the only product you can think of that, when used as directed, can kill you."

Smoking is the leading cause of preventable death in the United States and elsewhere.

While most smokers live long enough to find a mate and reproduce (may not reduce their biological fitness), the harm they cause their children by smoking may reduce their own and their children's chance of living long healthy lives. First of all, smoking by mothers has been shown to weaken the immune system, worsen asthma and cause cleft lips and palates in fetuses.

Secondly, exposure to secondhand smoke, which children of smokers live in, sends kids with asthma to the hospital with breathing problems. It is even linked to strokes and heart disease in non-smokers. (BTW, most cigarette smoke escapes into the air, to be breathed in by other, non-smoking people).

If you must consider aesthetics, smoking contributes to cataracts, gum disease, tooth decay, wrinkled skin, and yellow teeth and nails, any of which will put a dent in your sexy appearance!

Now that we know smoking for the killer that it is, some see it as even more of an illicit turn-on (back to the mate attraction idea!). But if you smoke, remember it can impede blood flow to certain body parts...

So why not respect your ancestors, who fought off actual dangers of big scary animals, starvation, freezing cold, and medical care that "cured" disease by bloodletting to ensure that you are here today, by keeping your body -- the only one you will ever get -- and those of your own children out of harm's way?