How to stay warm in winter? Ask Fido

It's January in the Polar Vortex that is much of North America this winter, and a guy is walking his dog down a Washington, DC street. The guy is covered by a wool hat, boots, layers of clothing, scarf, and a fleece jacket, all under a thick coat, and the dog walks alongside wearing nothing but his fur.

How does Fido do that?

Some researchers in Belgium were curious about that too.


They studied heat transfer and reflectance among fur-like objects, and their findings suggest that animals stay warm in part because their body heat bounces back and forth among their hairs (or feathers), rather than escaping right into the air.

People have assumed that fur and feathers trap a layer of air that slows the loss of heat, but the new research modeled heat movement among objects that mimic an animal's fur coat. The more objects (hairs) in place, the less energy was lost, which may be why thicker fur or feathers keeps an animal warm in colder environments.

The concentration of hairs or feathers can also scatter visible light, which in some cases causes the animal to look white and so comes in super handy for snowy owls, polar bears, arctic foxes, snowshoe hares, and other animals of the far north.


Who has such thick hair?

The masters of staying warm are, of course, those animals that have adapted to living in the coldest places. And their thick coats support the theory that backscattering of heat energy among hairs in the coat keep heat in. Sea otter fur has over 100,000 hairs per square inch (we humans have about 100,000 on our whole head), and their dense fur traps air bubbles, which help insulate them against frigid Alaskan water.


Polar bears have both a dense inner layer of fur and an outer layer of long guard hairs, as well as a layer of fat, or blubber. Between the fur and the blubber, polar bears are Arctic specialists: they actually overheat in temperatures over 10 degrees C (50 degrees F), such as at zoos.


Both polar bears and sea otters make their living in frigid temperatures, as do sled dogs. Dog like Fido on the DC street also benefit from heat radiation in their fur, and northern dog breeds like huskies and malamutes have particularly thick coats or double-layer coats like polar bears.


Even animals with dense fur have other features that keep them warm. Polar bears (together with marine mammals such as seals, sea lions, and whales) have a layer of blubber just beneath the skin to insulate them in frigid waters.

Sea otters have a turbo-charged metabolism that keeps them warm but requires prodigious amounts of food to maintain (they eat over 25% of their body weight per day - how much would that be for you?).

The blood vessels in the legs of northern dog breeds are arranged to keep blood flowing there to avoid frostbite.

Fur and feathers aren't the only way animals stay warm--- some gain more fur, others more fat, others more friends, and still others just sleep! Have a look: 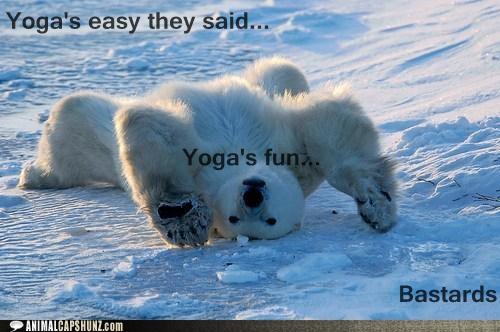