Flora and fitness 2: beyond weight

Here's a final word on gut bacteria (I promise!) – one more, since they affect not just weight, but also our brains and defense systems. Yowza.

I hadn't thought about this before, but our gut is one of the main areas of the body where the immune system interacts with what's brought in from the outside world.

Food is foreign, just like anything we touch with our fingers or feet.

So it makes sense that the intestine contains the largest mass of lymphoid (immune system) tissue in the body, and our friendly resident gut bacteria work with it to keep us healthy.

How does that work?


As I've noted previously, the human gut is the natural habitat for a large and diverse community of microbes that have adapted to live in its normal conditions and want to keep it that way.

Biological fitness for bacteria is the same as it is for the rest of us: they need to survive and reproduce in order to pass on their genes.

They are single-celled and mainly reproduce asexually (they double their genetic material and divide in half, to form 2 identical cells), so each duplicate cell is equally adapted to its host's gut environment and doesn't want to see it messed up.

The resident bacteria help to prevent colonization by foreign, potentially harmful, microbes by, for example, occupying sites along the lining of the intestine that prevent the foreigners from attaching to anything.

The resident bacteria also consume (break down) the nutrients, such as iron, that we provide, which leaves less for the alien microbes. Resident gut bacteria thus serve as committed players in our fight against infection and disease.

Gut microbes also contribute to our immune system by, for example, producing a substances called butyrate as they digest dietary fiber.

Butyrate in the gut changes "T" cells (a type of white blood cell that works in the immune system) into regulatory T cells. Regulatory T cells slow the immune response, which helps contain excessive inflammatory responses, such as autoimmune disorders.

Inflammation, the body's immune response to harmful stimuli (like a bee or wasp sting, but can be longer-term), has been associated with many chronic diseases. For example, inflammatory bowel disease (IBD), a gut-related autoimmune disease, is thought to result from changes to gut bacteria from either foods or antibiotics.

Treatment for IBD typically begins with anti-inflammatory drugs, though new options include fecal bacteriotherapy (yep, it's what you think – recall the poo-exchanging mice from the last post), designed to restore a healthy composition of gut bacteria, just like the mice did on their own.

A growing number of medical researchers are pointing to the gut as a source of the inflammation in other diseases as well. Our gut flora actually help maintain the lining of our gut by feeding it with fatty acids they produce as they break down fiber. If the right microbes are missing, that source of nutrients for the epithelial tissue lining the gut disappears, which may weaken it (a yet-unproven condition called "leaky gut") and allow bacteria, toxins, and proteins to escape out into the bloodstream. Unpleasant, at best, and possibly linked to disease.

Evidence suggests that gut bacteria that escape our digestive tract may even trigger depression, which brings us to our recent, but increasing, evidence that gut bacteria may influence our mental states relating to eating and other activities.


Playing with your mind


Your gut bacteria may be tricking you into being hungry (see? it wasn't your fault).

Apparently, gut bacteria can not only recognize the hormones of their host (us, in this case), but also synthesize them. The microbial community down under can respond to both the nutrients that we've eaten and the state of some of our hormones.

Acting together, they communicate with part of our nervous system that works in the gastrointestinal tract and may even be able to influence our appetite.

Those nerve cells together used to be called the enteric nervous system but are now increasingly being given the far more elegant name "gut brain". Our gut brain is actually linked to our regular "Big" brain, and it very regularly tells our Big Brain when it is hungry. And when it is full.

Normally, when sufficient food is in our digestive tract, or nutrients have been moved from the intestines into the bloodstream, the gut brain signals to the Big Brain (hello, up there!) that it's full and we should stop eating. Right.


Continuously eating fatty foods over time upsets communication between the gut and the brain, which in turn perpetuates a bad diet and weight gain.

As this article published in Science magazine explains, eating too much fat may cause people to have to eat more and fattier food to feel the same satisfaction normally gained from eating a meal.

A long-term, high-fat diet changes how the gut signals the brain to both enjoy and to stop eating. The change suppresses the production of dopamine in the brain, which, in turn, leads to the need to eat more high-fat foods to get that same satisfaction from eating.

The researchers suggest that restoring proper signaling from the gut to the brain (which they did by administering a certain gut-produced signaling molecule called oleoylethanoldamide) may make people feel satisfied and happier eating healthier foods.

Similarly, mice that were fed antibiotics that killed off gut flora showed changes in their brain chemistry that have been linked to depression. As with food-related behavior, researchers suspect that gut bacteria may be producing chemicals that signal to and potentially influence the brain's functioning. At least in mice.

Yet in both mice and people, new and increasing evidence tells us that our normal ("friendly") gastrointestinal bacteria play various important roles in our daily functioning and well-being. Who knew? 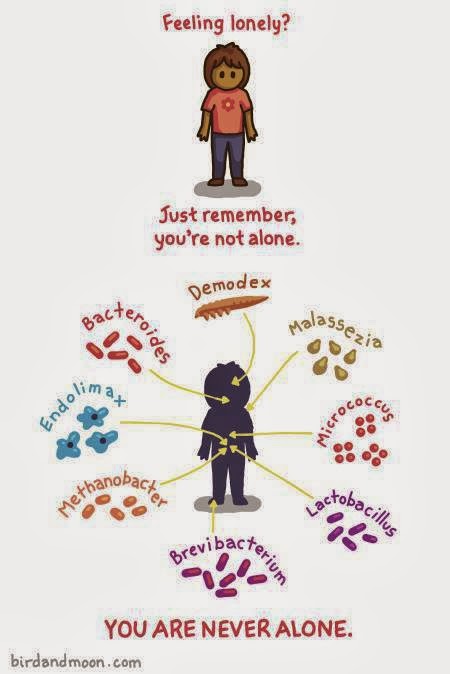 Even though the study of our gut flora is still in its early stages, there is a wealth of information available on line. Here are just a few articles, including some from the last post:

A technical, but clear, description of gut flora and their role in health and disease, from the Lancet (2003)

An extensive and fun introduction to our microbial world, by Michael Pollan in the NY Times

More than you wanted to know about metabolic syndrome, (plus a photo that clearly shows abdominal "central" obesity) from Wikipedia

My previous post on how eating certain high-fat, high-cholesterol foods — including eggs and beef — encourages bacteria to produce a compound, called TMAO, that seems to boost the risk of heart disease.