Evolution: good but not perfect

As we move forward into a new year, I thought we might talk a bit about our evolutionary progress.

Since the time of our early humanoid ancestors, we've evolved big brains that we can thank for helping us develop languages, space flight, the polio vaccine, and television.

Our evolved ability to walk on 2 legs frees our arms to carry food, water, children, weapons or, of course, a tennis racquet or golf club. We are the only mammals to do this.

These abilities helped our ancestors survive and reproduce, so the related genetic traits have remained in the population - that's natural selection.

While evolution has, on the whole, been good to us, it isn't perfect.


Our large brains, for example, require large skulls to protect them. We are not kangaroos, which have teeny young that are born very small (size of a lima bean!) and continue their development in the mother's pouch.

We are placental mammals, which means unborn humans grow inside their moms and have to somehow get out. Big head + birth = Ouch. Some of you might be intimately familiar with this.

In fact, over the centuries, the large brain of newborn babies was responsible for causing not only pain but death in the mother and possibly the baby as well. Childbirth was far more risky for humans than for other animals and was the leading cause of death for women of childbearing age until relatively recently.

Death is very bad for survival, so brain size is limited by the realities of childbirth. Our current brain size is considered to be a balance between surviving birth and thriving afterwards.

We can also thank our ever-larger brains for the painful development of wisdom teeth, a third set of molars that typically erupt at the end of adolescence, thus the name. This extra set of large flat teeth helped early humans grind up plant tissue that made up a bulk of their diets, before our bigger brains figured out that by chopping and cooking food, we didn't have to chew it up so much.

As the human diets changed, our jaws got smaller and our brains expanded. This expansion, within the limited capacity of the skull, left less room for both the jaw and teeth.

Today, wisdom teeth problems occur when there is insufficient space for them to erupt properly, so they come in on an angle, which may crowd and damage the jaw or other teeth. More Ouch. 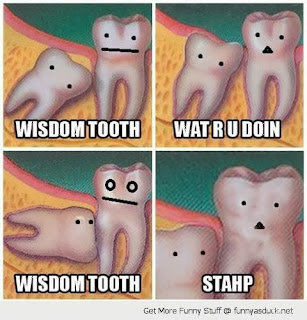 Since we don't need them anymore, there is debate on whether to remove them surgically before they erupt.

So why do we still have them?

For one, humans started with all 32 teeth, like most other mammals. For many people today, the teeth come in just fine and they help chew food as they were meant to, so there is no reason not to keep them.

Nevertheless, about one third of people don't have wisdom teeth, due originally to random genetic mutation that must have been helpful and spread.

Some researchers suggest that the teeth will eventually disappear from future humans' mouths - the Inuit of Alaska, who have particularly narrow jaws and large teeth, also have the highest rate of wisdom tooth-less people, so it may be particularly beneficial for them.


Our ability to carry tools while we walk around upright on 2 legs is a defining human feature, but it carries a downside, namely back pain.

With a skeleton that has gradually but drastically changed form over many thousands of years, we've ended up with a spine meant for 4-legged climbing and walking that has adapted bit by bit to 2-legged walking.

The 24 movable vertebrae and discs that make up our spinal column, are loosely stacked on top of one another.

Over millennia, this loose column developed S-shaped curves to keep it balanced in an upright position (dogs, cats, and llamas have straighter spines). Put our big, heavy head on top of this loose curvy structure and the spine becomes stressed at certain points as it fights gravity and tries to keep us upright.

Kyphosis (humpback), lordosis (swayback), and scoliosis, and are all painful conditions that result from an abnormal curving in the spinal column. But even among the majority of people lucky to be born with "normal" spinal curvature: "nearly everyone at some point has back pain that interferes with work, routine daily activities, or recreation."

Even our walking form -- swinging our arms opposite to our legs -- creates a twisting motion that can wear down the vertebrae and lead to pain.

It gets worse as we age -- the accumulated stress of millions of twists and turns and bends take their toll on the discs between the vertebrae -- and as we live longer, this stress appears as back pain from inflamed or even herniated discs.

"We're the only mammals that spontaneously fracture vertebra," according to paleoanthropologist Bruce Latimer at Case Western Reserve University.

Our early hominid ancestors lived only 40 or 50 years, and the wear and tear associated with a long life was not an issue until relatively recently.

Now that people commonly live far beyond that, there are various strategies for taking care of our backs for the longer haul. "Exercise may be the most effective way to speed recovery from low back pain and help strengthen back and abdominal muscles," according to the U.S. National Institute of Health.

Then there are our aching feet, another problem brought on by the evolution from 4 legs to 2 legs. Although our walking on 2 legs uses less energy than chimpanzees do walking on all fours, Ankle sprains, arthritis, flat feet, and bunions may have been problems for humanoids over 3 million years. 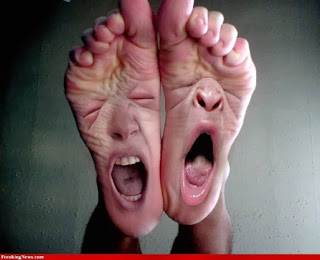 Our feet are another relict of tree living: we have more bones (26) in our feet than we need to walk, but that large number made feet flexible and helped our earliest ancestors, who moved around more in trees, grasp and move around among branches.

One change that has helped us on the road to bipedalism: our big toes face forward and join the other toes, which facilitates walking, whereas a chimpanzee's big toe (and that of early hominids) opposes the others, which helps with grabbing branches.

So our engineering isn't perfect and appears to be a product of gradual, individual changes, rather than a single change or pre-planned form. Our bodies still serve us incredibly well, and we must ensure we take the best possible care of them.