Know your friend, know your enemy

I, for one, am always forgetting people's names. Faces I can hold onto, but names elude me. I know I'm not alone on this (right??), but as a social animal, it's really important to know who's who.

My recent trip to Papua New Guinea showed me how critical it was to highland people to know from exactly which village each person was. People still associate closely with their tribe, and tight-knit clans still fight to the death over land and other resources.

With 700-800 different languages and a history of both cannibalism and strict payback for earlier perceived wrongs, ones ability to recognize the faces, smells, and sounds of others can be life-saving.

Walking through Unda village, I remember being told that up and over the big hill ahead (from where I'd come earlier that morning, actually) lived a different tribe.

For me, as a member of a REALLY faraway tribe, the difference between the folks in this village and the folks up the hill was not an issue, but for them, it was like talking about people from another country.

In earlier times, tribal boundaries also limited where you could travel safely. The resulting isolation led to the development of all those languages, some of which cover areas of just 20-50 km2.

It's the same for other social animals: knowing who's in your tribe can mean the difference between life and death, or at least avoiding a great deal of unnecessary stress.


Which animals are social?


Many, actually. Social mammals, for example, include elephants, dolphins, lions, gorillas, chimpanzees, and European rabbits, as well as African hunting dogs, meerkats, otters, and I know your next guess – vampire bats (yes, they are blood donors as well as blood suckers).

Plus naked mole rats, which are so bizarre, they deserve their own blog post.

Social insects, including bees, wasps, ants, and termites, recognize scents of enemies, as well as familiar conspecifics (individuals of the same species), and can react appropriately.

Among social species, more than one generation of adults may overlap, and group/family members help find food, raise young, or defend turf.


Long-lived animals that live in groups and depend on each other, such as elephants, need to not only distinguish friend from foe, like bees or ants, but also remember relationships and previous encounters.

Elephant matriarchs are known to have not only great spatial memories, but great social memories – they remember friendly faces and smells both of other elephants and people. With their exceptional sense of smell, adult females can recognize the urine of tens of their female relatives, even when they have been separated for years.


Elephants gather in herds or split apart as they cross their home ranges. A previous post discussed how elephants' spatial memories help them survive, but they also need to be able to quickly find each other to regroup smoothly.

The faster they can recognize true strangers from friends and relatives, the faster the herd can either form a defensive wall around vulnerable calves or, if the approaching elephants pose no danger, get back to feeding and relaxing. When you have to spend 16 hours a day feeding just to maintain your (large) body weight, this extra time is critical.

Scientists have found that older matriarchs in African herds were the best at picking out genuine strangers by means of other elephants' smell or contact calls, highlighting the role of older larger females in herd survival. (read: don't buy ivory!!, which is poached from larger animals)

On the other hand, Maasai warriors spear elephants to prove their masculinity (sigh), and the smell and the red color of clothing of Maasai men causes elephants in the region to flee, while the clothing of a neighboring pastoralist tribe that doesn't attack elephants does not invoke the same fear reaction.

Unfortunately, for elephants and other animals with body parts of economic value, their principal enemy creates powerful technology, believes in superstitions, engages in globalized economy, and likes to show off wealth or virility by openly displaying said body parts.

Fortunately, that enemy also has empathy that, given our extensive power and knowledge, we can and must show toward other tribes and other species. 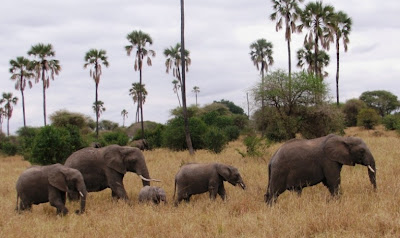