Exercise may regulate anxiety - related to flight or fight

Regular exercise is known to help reduce anxiety, but how?

A recent study in The Journal of Neuroscience suggested that exercise, in this case running, helps reduce anxiety by keeping the brain calm in the face of stress.

Exercising regularly seems to reorganize the brain, at least in mice, to deal better with stress by shutting off the "flight or fight" reaction to a particular stressor and allowing the brain to function normally.


Researchers at Princeton University found that the brains of active and sedentary mice behaved differently in response to stress.

In the study, "runner" mice had access to a running wheel*, and sedentary ones didn't.

When runner mice were exposed to cold water (the stress), neurons that control the excitement levels in the ventral hippocampus, a brain region that regulates anxiety, immediately became active.

In the neurons of the sedentary mice, the cold water turned on a set of short-lived genes associated with stress response, but the neurons of active mice lacked these genes, which kept their brain cells from immediately leaping into an excited state in response to the stress.

On the contrary: when faced with the stress, the brains in mice that exercised regularly appeared to control their reactions.

The runner mouse brains activated certain neurons that are known to keep other, "excitable," neurons in check, and they released a substance (a neurotransmitter called GABA, gamma-aminobutyric acid) that reduced excitability in the neurons.

In other words, they stayed calm. OK, so the stress was being exposed to cold water, not to a hungry cat, but, still... if you were a mouse getting doused with cold water by some giant primate, you might stress too.

* Cool factoid: mice who have access to a wheel will run up to 4k a night. Crazy rodents.

Works for people too 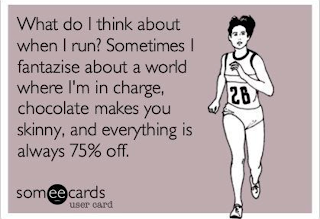 My friend and colleague Louise tested the theory a few weeks ago at a scientific conference for which she had to give a talk with lots of theory and wasn't sure how well that was going to be received = Anxiety.

She's also started running recently, and apparently, that was a good thing.  She wrote to me afterwards:  "I went for a very brief run the morning of my talk. It really helped! Thanks for the advice."  Awesome.