Like children, young animals, especially those living in groups, horse around and play frequently.

Scientists still don't know why, exactly, though they've proposed various reasons: training for adulthood activities, learning to be aggressive against attackers, learning to socialize with others in their group, and even lowering their stress level.

What about adult animals -- do they play?


Behavioral researchers have used the word “play” to describe behaviors that don't seem to have an obvious purpose or any apparent role in improving an animal's fitness (its survival or reproduction success). What about the dolphins in these two videos -- are they just playing?

The image below that begins this more scientifically-presented video, from the American Museum of Natural History, looks ominous - is some sea monster offering a dolphin as a sacrifice?  Is the dolphin dead?  No, the dolphin is, apparently, goofing around with a whale and using him/her as a slide. Have a look!

The whales are huge compared to the dolphins, but I don't think fear plays a part here, just fun?


Perhaps you've been lucky enough to watch dolphins ride the wave created in front of a fast-moving boat?

Here is a second video, provided by a Dolphin Safari crew that caught and filmed a pod of wild bottlenose dolphins riding (surfing?) the wave generated by an 80-foot blue whale swimming along at the surface along the coast of California:


To me, these videos suggest more questions than answers!

What do you think - are these dolphins (and whales) just horsing around? 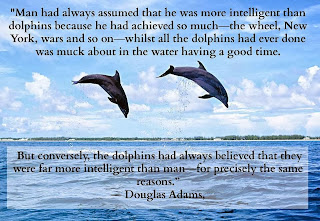 Did the whale care that dolphins were surfing alongside him/her?

Did the whale enjoy the interactions as much as the dolphins seem to?

Is life in the sea easy enough for them to spend time playing?

If so, which ones?

More on this in an upcoming post, but for now, any answers are appreciated, even ones that sound logical but have no scientific basis!
Posted by Sue Palminteri