Should I stay or should I go?

There I was, muscles tense, stomach in knots, palms sweaty, hyper-aware of my surroundings and wishing I were anywhere else at the moment. There was a lion not 30 feet away, staring right at me. 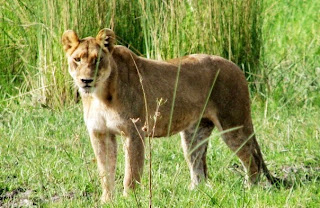 It's all true...except the lion.

The truth is, I had to give a talk at a scientific conference a couple of weeks ago, and I was nervous. I don't do this often enough to get relaxed about it, so each time I do, it's a Big Deal. I decided that one should either teach, and talk in front of people all the time, or not give talks, because otherwise it can be so stressful! (WHY do I do this to myself?)


Flight or fight or freeze?


It turns out that the physical shaking I experience before giving a professional talk is, in fact, part of the "normal" fight-or-flight response, also called the fight-or-flight-or-freeze response, hyperarousal, or acute stress response.

The fight-or-flight response is the physiological reaction that occurs when we perceive some imminent harm, attack, or threat to our survival and we need to act. The response is our body’s unconscious preparation to save itself either by fighting off an adversary or fleeing something clearly larger or scarier than we are.


For animals like mice, antelope, or small birds that are preyed upon by big scary dogs, cats or eagles, these reactions are essential and probably life-saving. Our early human ancestors, too, had to react quickly to threatening stimuli with little psychological or physical preparation. Strength, speed, and complete focus increased their chances of victory in combat or survival in face of a clear superior (i.e. mammoth).

Flight-or-fight is an involuntary response to a perceived threat, which may or may not be an actual threat: it can also occur in situations that are not exactly life-threatening, such as public speaking.

What happens to an antelope, or an African herdsman, or any of us, if we really DO see that lion coming toward us?


First of all, our sympathetic nervous system kicks in, which activates the production of several different hormones, including cortisol and epinephrine (aka adrenaline). These hormones cause additional reactions in the body that allow an immediate response to the threat.

Our blood pressure increases to send more oxygen and energy to muscles, pupils dilate (open) to allow us to see more clearly, and fats and glucose start to metabolize quickly to provide instant energy for fast, potentially violent muscle movement/contraction. This is how people can lift cars to rescue someone family underneath.

Meanwhile, activities not critical to survival slow down: as blood flow increases to the muscles, it slows to other parts of the body, including our stomach, intestine, and genitals, and reduces our hearing and peripheral vision to encourage us to FOCUS.

The reaction suppresses our immune system and releases endorphins that suppress pain, since the normal need to prevent disease and injury is suddenly less important.

All of this gives the person or animal extraordinary strength, speed, focus, and endurance in the face of an imminent threat to his/her survival or that of someone around them. Or giving a talk in public.

You might recognize these additional symptoms, which are not so desirable when you're about to speak to an audience!

This video gives a great explanation of the response:

The flight-or-fight response actually also includes freezing - many birds or small mammals will stand perfectly still so that a predator won't see them or they will play dead in order to discourage a cat or other predator that wants to chase live prey. Freezing may also be our initial response to potential danger, as it makes us less noticeable and gives us a few seconds of silence to assess our situation.


Prepare for your talk


Remember, these responses are automatic, though there are techniques and actions that can help reduce them when the threat is not, in fact, life-threatening.


Has this happened to you? If so, what are your preferred ways of dealing with nerves?