Size does, in fact, matter, but size of what?

Bigger is always better Down Under, right? Right.

A recent study at the Australian National University in Canberra of women’s preferences for male anatomy made news mainly because it found that penis size affects men’s attractiveness – the bigger the better. (Duh!?) 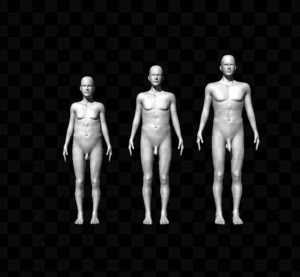 I’m late in posting about The Penis Size Story, but since this blog talks about biological fitness, and since my recent post discussed female choice (albeit in birds), I think it’s still relevant!

Researchers asked 105 women to rate the sexual attractiveness of computer-generated male bodies (no test animals used in this study!), which varied in three ways: height, shoulder-to-waist ratio, and (flaccid) penis size, each with 7 possible sizes, resulting in 343 different images.

These days, women don’t get a chance to compare like that, as clothing gets in the way. However, the researchers believe that the relatively long penis of human males, which, BTW, is far larger than it needs to be to perform its essential biological role, is actually the result of many generations of prehistoric women choosing well-endowed men.

It may not be just chance that human males, who walk upright, have a “protruding, nonretractable” penis that stands out (if you will) from the hair around it and it thus highly conspicuous to females as well as other males.

The high attractiveness ratings given by the modern women in this study to male bodies with larger penises supports the idea that female mate choice could have driven the evolution of larger penises in humans.


The assumptions of this story are limited in 3 ways, says Greg Laden on his blog at National Geographic:

1. we don’t know when men started wearing clothing that covered their penises, and evidence suggests that humans wore clothing some 2 million years ago, so when did women have opportunities to show their preferences?

2. we lack a strong reason to assume that flaccid penis size was the determining factor for women in choosing a mate. Given women's relatively heavy investment in child rearing, they would likely care about a man’s behavior and potential in helping raise a child, not just his possible performance in bed.

3. the relationship between flaccid and erect penis size is weak, so if certain early human societies did not use clothing, women would could have observed and heard (gossip?) about erect penises, which might be a better predictor of fertility or performance.

In addition, remember that the Australian study examined whether male bodies were sexually attractive to the female participants, not whether the women wanted to marry them – our choice of mate is more complicated than that (it is, right??) and can vary among cultures.

In other words, women (at least in Australia) may prefer a large penis when choosing a partner, but that doesn’t necessarily translate into more offspring who carry those genes.

If flaccid penis length doesn’t imply erect penis length – which might improve reproductive success – then it would have to have some other link to having more children. Otherwise, the trait for a longer penis wouldn’t get passed down from one generation to the next.

It's the whole package that matters


Furthermore, while larger penis size and greater height were both found to be more attractive, by far the most important factor for these Australian women was a high shoulder-to-waist ratio; a combination of broad shoulders and a narrow waist was considered most attractive. This ratio alone actually accounted for around three-quarters of the variation in attractiveness, so really, those regular trips to the gym, swimming pool, or basketball court seem to be working.

In addition, the importance of penis size depended on the other two traits of height and shoulder-to-hip ratio. It has to be proportional: “...penis size has a much larger effect on attractiveness for taller men, than it does for shorter men,” according to Brian Mautz, formerly of the Australian National University in Canberra and the study’s lead author.

The researchers were surprised to find that a man’s height and penis size affected female’s ratings about equally. Height has been associated with better health, higher education level, and higher salaries, and reproductive success. Tall guys have more kids => more tall kids, so successive generations of women preferring taller men may very well have helped increased the height of the population over time.

Unlike height, this study did not actually ask whether the attractiveness to females of longer male penises has actually influenced male genitalia over human evolution. It asked whether women found it more attractive, but of course we must differentiate between women finding a trait attractive and their choosing it in a mate. In other words, the study didn't determine whether flaccid penis length truly affects female choice in a mate.

And anyway, women have such unrealistic expectations


Most interesting to me was the fact that even the top values for each factor -- height, shoulder-to-waist ratio, and penis size – apparently still weren’t optimal. The women’s preferred choices were above the highest 97.5%. in all three features. As the authors state, “...the maxima are more than two standard deviations from the population mean for each trait.”, so the best are way above normal, especially for height and shape, but also for penises.

Men, don't panic: the incremental advantage of extreme height or penis size was not as much as the difference between small and average, or average to above-average measures.

Learn more - I know you want to!


Here is the reference for the original paper: B.S. Mautz et al. Penis size interacts with body shape and height to inﬂuence male attractiveness. Proceedings of the National Academy of Sciences. doi:10.1073/pnas.1219361110.

Here are just two articles on the relationship between height and larger families and other financial and social benefits that pervades our society.