Good-looking AND a good dancer? Female choice in action

I just visited a fantastic exhibit on the birds of paradise at the National Geographic headquarters in Washington, DC. I wish I’d known about it earlier – this was its last week in DC – but it is headed on tour, and you can check on it and other NatGeo exhibits here and here.

What’s so great about the birds of paradise? (Hint: hot guys and choosy chicks)

Here’s a preview (warning: this post is heavy on videos because I couldn't say no to any of them!):

Answer: Several things, and they are related.

Male birds of paradise (can we call them BoPs? you’ll see why in a minute) have evolved ornate feathers with crazy shapes, colors, textures, and shine. They show off their designer duds by displaying to the duller-colored females, often by dancing, singing, posturing, and even acrobatics.

Why do they do all this? 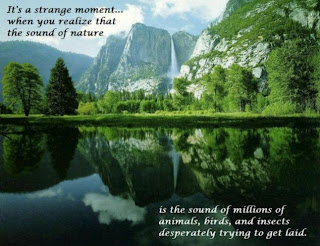 Must I answer this?

These guys are looking for ladies, and in their part of the world, looks are everything.

They live in forests of New Guinea and Australia, where they have few predators and lots of food (fruit and insects), so that survival is relatively easy. It’s the reproduction that’s challenging, as there’s lots of competition for ladies.

The 39 species of bird of paradise are all descendants from a basic crow-like bird which have, over time, branched out (so to speak) into myriad forms and colors, seen mainly in the males but selected for by the females. As ornithologist Ed Scholes of Cornell University explains, in the BoPs world, females “call the evolutionary shots” -- they are equally, if not more, important than the males in influencing what BoPs look like.

What kinds of shapes and colors do they wear?


You name it. All three primary colors (red, blue, yellow) on one bird, the three (orange, purple, green) derived colors on the next, bright red with bright white, jet black with shocking blue on another (with or without complementary orange fuzz), and more. Many also have wiry, antenna-looking head or tail feathers with ornaments at the end, long white feathers trailing from their heads or tails, or a shock of tail feathers fluffed out like a bunch of red or yellow streamers.


Some of these feathers have no other function but to attract females – the ladies like them, so the guys have them, to increasingly greater extents. Scientists don’t know exactly what about the display attracts the females, but as David Attenborough puts it: “the more extravagant a male is, the more likely he’ll be noticed.”

Birds don’t just develop a particular color or feature overnight, and they can’t develop night vision or opposable thumbs because they lack genes to do so. But what they do have can become exaggerated over time through sexual selection – the evolution of traits that attract the other sex and so get passed down to the next generation more often.

You’ve heard of “natural selection,” which results in individuals with adaptations that help them to survive in their surroundings.

Sexual selection’s influence is seen where individuals vary in ways that make them more attractive to and different from the opposite sex and able to get laid mate more frequently, even if it may decrease the animals’ chances of survival. Both involve competition to pass on more copies of one's genes to the next generation. This Cornell Lab of Ornithology video gives a wonderfully clear explanation of both natural and sexual selection - great for teaching these concepts!

Which male is the best?


The best male is the one that will help a female produce healthy offspring with high biological fitness. Since fitness in the natural world actually combines both survival and reproduction, fit offspring will not only survive but will also breed successfully.

Early on in their evolution, some early BoP females may have thought that red showed off strength, health, and fitness, while others must have preferred blue, or green, or some combination. And some must have really been attracted to thin tail or head feathers with little knobs at the end.

Each of these decorations could potentially be a handicap in an otherwise dense green forest, as it makes the wearer clumsier or more obvious to predators. Any male with these traits that survived well was clearly strong, as well as attractive.

You can hear mom now: “Any son of mine will have the brightest red wings and the fluffiest tail feathers in the forest.” And: “Any daughter of mine will know a good male when she sees one.”

Why does she care?


She cares because she wants her young to survive, so she picks a male that looks good despite the disadvantage of dragging around a long fluffy tail or red wings that make him an easy target. More importantly, she knows red wings and fluffy tails rock, and she wants her son to attract lots of females and have lots of babies himself. And when the time comes, any female that picks him will feel the same.

What do you mean by dancing and posturing?


Just looking great isn’t enough for the fussy females. The elaborate dances and postures of males of some species are athletic, entertaining, and impressive, even for us humans!

Some of the BoPs, such as the Black Sicklebill throw their shoulder feathers (epaulets) up over their heads to create really non-birdlike sculptures with their bodies.


Others do the same while they dance. You may have seen them on YouTube – especially this guy, often with some fun dance music. He is a Superb BoP, and he hides his head entirely behind his wings as he bops (see? the acronym totally fits). He returns to bird form when he brings his wings down.

The gorgeous Blue BoP must be channeling bats for his display. He will carry on like this for minutes at a time, here with the female inspecting his every vibration.

Then there are the parotias, the ballerina BoPs. Note the iridescence on this guy’s chest and his dance, which seems to combine ballet and hip hop.


They dance only for courtship display, and the right dance steps must be performed in the right order for the females to consider mating. Sheesh, super demanding.

Male BoPs eat, perch, and move around similarly to females: it’s their mating display that distinguishes them.

In their world, the male with the mediocre display won’t die, but he won’t get the chicks. The guy with the bold, sexy display will, so his genes will be the ones that show up in the next generation.

In fact, many males never get the chance to mate – a few father most offspring, further narrowing and specifying the gene pool within each species.


How did the species get to be so different?


Over time, the colors and dances of the males have actually become linked to their fitness (survival + reproduction) in the minds of both them and the females, even if some traits don’t actually assist or demonstrate the male’s health or parenting ability.

It’s a feedback loop: by choosing a colorful male, a female bird increases her own fitness because her sons will be more sexually attractive to females that carry the preference for the trait, and her daughters will know to mate with a good-quality, colorful male.

The repeated generations of males with certain traits and females who prefer them have produced exaggerations of the traits and preferences. Over time, this intensive selection for certain physical and behavioral traits combined with the geographic isolation of the islands and mountains of New Guinea to produce the variety of BoP species alive today.

As sea levels rose and fell over the last few million years, the montane forests of New Guinea have been alternatively connected to and separated from each other and from surrounding islands. Birds living there survived the extinction of dinosaurs, but populations have been separated from each other for long periods, which allowed them to adapt to their respective environments.

Today, each BoP species is typically found in only a small area of either New Guinea, outer islands, or Australia.


For all those interested but unable to see the exhibition, this National Geographic video shows Cornell University’s Ed Scholes and photographer Tim Laman explaining their 8-year odyssey studying the BoPs and some of the creative jungle filming techniques. In it, they present some of the exhibition’s best videos and still photos of these wonderful birds and their dramatic behaviors, including filming the crazy parotia ballerina dance from above.


A fun introduction to several popular BoPs and their displays, as only David Attenborough can narrate.

And here is a compedium of clips (I just think these guys are amazing!)


To see the most complex dance of all BoPs, here is the Cornell Lab of Ornithology video of Carola’s Parotia, the king of the dance floor. You'll be impressed too!

If you haven't had enough of the BoPs yet, visit Cornell's bird of paradise project site for film, photos, lessons, and other media about this study, or NatGeo's education site about sexual selection, using these crazy birds as the prime examples.
Posted by Sue Palminteri