Half-marathon success (a tad behind schedule!)

Ooops. I realize I never posted results from the Khao Yai Half Marathon that I ran in early March, together with about 20 others from our Bangkok Runners group. It's not like I do this every weekend, so here is a brief rundown:


It was an out-and-back race, which meant that we all got to see and cheer on our teammates at various points in the run.

The best was seeing Matt, our fastest runner, on his return leg, just behind a pace car. He was so far ahead that we couldn't even see the second runner (!!), and he went on to win the whole event with a personal best time of 1:24, give or take a few seconds. Nice job, Matt!

This official photo shows the start of the race. It's dark because races in Thailand start early to beat the heat. This one started at 5:30am, but some of the full marathons start at 3:30 or 4am! 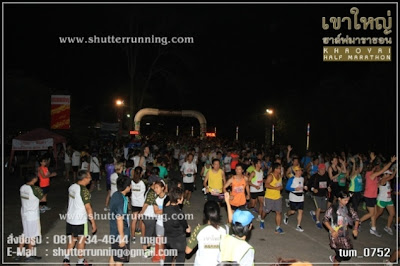 Note the ladies in pink shirt / dark shorts and white shirt / green shorts on the right. That is me and Nan, waving to our friend taking our photo. Below is that same moment, but this is the photo that was being taken of us. Pretty cool! We look so exuberant! 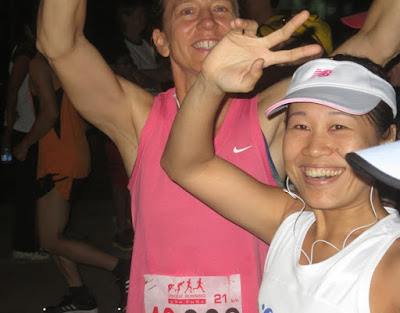 The run went really well for me, personally -- better than my 1st half marathon, for which my training was subpar. I was fitter and much more ready for the distance this time. And it showed!

Nan and several others made a fast start, which I joined briefly to break through the crowd, but realized I couldn't keep up with their pace. So either they were going to run the best race of their lives, or they might not be able to keep it up. At least I knew I wouldn't be able to!

More importantly, I didn't save too much energy for some great sprint at the end, as I usually tend to - I put on my headphones and just went for it in the second half and really kept up what was for me a fast pace for the next 8 kilometers (5 miles).

The last 3 km (2 mile) stretch was a gradual uphill, and at that point, I knew I hadn't saved up too much energy! It was a killer, and while I didn't really slow down, there was also no big sprint! 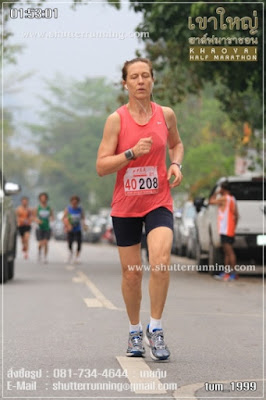 The sponsors, Unique Running, had photographers before the finish line, so here I am, digging deep to not slow down in those last 200-300 meters. Final time was very close to 1:53:30 - yes, I forgot to stop my watch and there was no automatic timing. This was great for me, but apparently the world record for women's half marathon is just over 1:05, so there's still a bit of improvement to be had...

Lessons learned: start at your own pace, know your own race style, and try going for it before the end!

Apparently, I wasn't smiling at the end, but that was only because I was so focused and so exhausted, but that was short-lived -- I got to cheer on fellow Bangkok Runners, and nearly everyone had a PB that day.

Here is another (clearly far more organized, given the post date) running blogger's take on the race -- sounds like it was quite a tough one for her, but she gives a lot of race details for those interested.

Not only that, she lives in Bangkok! I supposed she ran a Thai running race, so...not so surprising. It is a growing community!
Posted by Sue Palminteri