Here's a funny thought for the day for all you predators thinking of preying on a Big Mac...


We of the modern era struggle with trying to eat right and exercise in the midst of a sea of junk food and sedentary fun (read: Facebook, YouTube, TV movies, Wii). I know this is not the case for a bulk of humankind, but it is increasingly frequent everywhere! 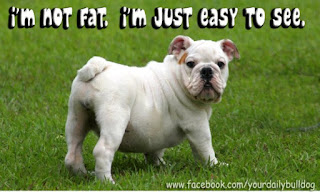 And we've all seen overweight domestic dogs and cats, who eat what we feed them and then relax for the rest of the day.

Yet predators, such as the big cats or snakes, will often eat a huge meal and then sit around digesting for days. So what's the difference?

Consider the leopard above or the cheetah from my last post. Even the world's fastest land animal would have a tough time outrunning and catching a gazelle or other prey if s/he were carrying around a few extra pounds (kilos). Forced diet soon follows. And their prey stay in pretty good shape just staying alive: any overly ample antelope becomes dinner a whole lot quicker than a thinner, lighter neighbor.

What about large animals that don't need to run away?

Elephants and other large herbivores (think cows, manatees, hippos) have huge mid-sections, but they are not so much fat as digestion experts. They eat huge amounts of low-nutrition foods (grass, leaves, bark, yum...), much of which is nearly indigestible, so their bellies are like big digestion machines. More on this in a future post. 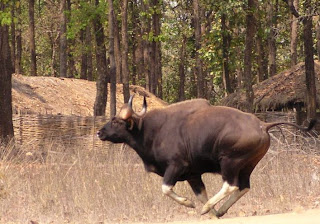 And here's a gratuitous photo of another prime specimen of large, powerful (not fat) herbivores: it's a gaur (gao-er), crashing through the brush of a park ranger camp in Kanha National Park in India with surprising speed.

You will find thick layers of blubber (a.k.a. fat) on a suite of marine mammals, namely the seals, whales, walruses, as well as penguins that live in the frigid waters of the Northern and Southern Oceans.

In fact, if they were to slim down to become cetacean or pinniped supermodels, they would freeze to death. Their high-protein diet of mainly raw fish and crustaceans is needed to stay warm and active.

Gotta get some sleep

Bears are powerful but not speedy, so while they will eat what they can get their hands on, a bulk of their diet comes from plants and insects.

Bears lack the complicated stomachs of deer, sheep, and other herbivores to digest plants efficiently, so they need to eat nutritious, energy-rich foods. But many of these foods aren't available in the cold northern winter, so northern brown and black bears can't keep up their energy.

Instead, they gorge themselves on you-name-it -- grasses, bulbs, roots, berries, and seeds, plus termites, eggs, and fish -- throughout the summer and even get a little chubby by autumn. Then they slow down movement and their metabolism and live/burn off their surplus fat over the cold winter, taking their newly-svelte bodies out to start eating again in the spring.


Not usually recommended for humans as a weight-control strategy, but apparently used by more species than we realize (it's the lack of food or water, not the cold, that brings on the siesta).

So that's how they do it!