Gene expression - variety is the spice of life

Most genes are the same in all humans (as they are in all hippos, hawks, heathers...), but our individual DNA is always slightly different from everyone else's.

But how, you may ask, can we add variety to DNA?

While the overall appearance and function of individuals in a population (of beetles, lizards, people, or plants) are similar, there is variation -- sometimes drastic, but usually subtle, as in:

Each combination of male and female genes in a (sexually reproducing) species is slightly different, because something called genetic “shuffling” occurs. Even with the same parents, you will have features or behaviors that are similar, but not identical, to those of your brother or sister. Nor is any of you identical to your parents.

For instance, I have my father's angled shoulders and my mother's light hair and big thighs. Sigh. My sister got the thighs, but broader, squarer shoulders and Dad's darker hair. Not sure where my brother comes from.

These features may or may not be useful to survival or reproduction.

Having thunder thighs may bestow an advantage (e.g. strength for running or finding food, considered sexy by potential mate).

It also may have no effect; or it might even be somewhat negative (e.g. need more food to maintain them, can't fit into skinny jeans), but unless it prevents the owner from surviving and having children, the codes for this form of thigh stay in the gene pool...for now.

We know no one person, plant, or animal lives forever. But your genes may, if they promote or at least don't inhibit, your survival and reproduction.

For instance, the genes of your parents and grandparents move from them to you and through you on to the next generation, and possibly beyond (thus the lament of some women you occasionally hear from me: “I have my mother's thighs!”).

The copying and combining of parents’ DNA sometimes produces mutations, which are changes in the DNA, generally from a DNA copying or combination error (ooops!). This is where the offspring has characteristics not found in either parent because the actual structure of the DNA has changed.


(click here to learn how DNA does its job "building" a human, or a lizard!)

A mutation is not necessarily useful: one that reduces survival or reproduction, such as the variation in coloration we saw with the hypothetical green and brown beetles in an earlier post, will be unlikely to flourish in future generations.

The sickle-cell mutation distorts and weakens red blood cells, so it is generally harmful, yet it persists in sub-Saharan Africa because malaria parasites can't survive in sickle-shaped blood cells.

A mutation such as the one causing sickle-cell disease may survive in small pockets in a particular environment in which its effects are less harmful, or it may disappear altogether, as with the green beetle coloration.

But remember that biological fitness only comes from successfully surviving and reproducing.

The genetic result of DNA mutations or a new combinations of genes from two parents can be good, bad, or neutral to the survival and reproduction of the recipient offspring. For instance, what do you get when you cross a parrot with a lion? (I don't know, but when it speaks you better listen!) 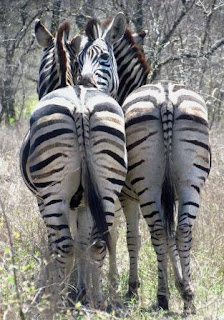 Speaking of lions, which of these stripe patterns might best aid a zebra in avoiding becoming lion lunch?

All zebras have stripes, yet each individual animal has a slightly different pattern. Some are darker, some lighter, some stripes are thicker, or closer together, etc.

We know the stripes help camouflage the zebra, so why so much variation?

You may already be thinking that where vegetation is darker and denser, genetic varieties for heavier stripes might be most beneficial, whereas in desert zones of sparse vegetation, thinner sandy-colored stripes might help the zebra avoid lions.

And of course lions, with their tan coats, are doing the same thing.

This is natural selection. In each case, the traits that help a population -- whether it is of zebras, lions, lizards, or buttercups -- stay alive and eventually reproduce ("adaptations") will be most likely persist over time and become more common in that population.

The variations exhibited by individuals can accumulate over time.

What helps increase fitness in the face of a weasel (long fast legs, small size, perhaps) is probably different than the traits that help the lizards avoid a hawk (agility in dense bushes, large body size – what else might help?).

In this case, as these variations that contribute to higher fitness stick around through generations, the two lizard populations might eventually evolve into separate species.

What traits would increase the anole's fitness if its main predator was a snake?

To sum up these last 2 posts:

Genes copied from our two parents are found in the nucleus each of our cells and carry information for making proteins. The appropriate genes in each cell are switched “on” or “off”, depending on the function of the cell, though with over 20,000 genes in each cell, there’s great potential for variation.

And, in fact, there is variability in both looks and behavior, so some anoles will have longer legs, others will have shorter legs.

There is also selection for advantageous traits.

Longer-legged anoles run faster and survive and reproduce better in the face of a ground-based predator than short-legged ones, so in this environment, the genes with codes for longer faster legs get passed on from the lucky lizard parents to each new generation of lizard babies.


Such a long post!  Yet there is far more to our genetic code than this blog can cover here, so please consult the resource pages below to learn more.

Once again, some super helpful resources for understanding genetics:

2. Genetics for Dummies provides some clear (brief!) definitions and some helpful DNA basics

3. Nimours Kids Health: health information for kids and their parents

5. A Wikipedia introduction to genetics

6. The University of California Evolution 101 web site and its pages on genetic variation
Posted by Sue Palminteri