Big Cats on air this week!

It’s Big Cat Week at National Geographic! Starting this Sunday, December 9th – you can watch what will likely be superb footage of the great cats (tigers, lions, jaguars, leopards, cheetahs) on NatGeo WILD on TV.


The NatGeo website has some super videos and photo galleries of the cats. One series of videos highlights the photography crew and the challenges they faced to film snow leopards in Afganistan.

Big cats are super cool. Tigers, lions, jaguars, pumas, leopards, cheetahs, snow leopards, and lynx fascinate us with their power and beauty. Their gorgeous coats are adapted to camouflage them in savannas, tall grasses, or forests, and their strength and killer teeth and claws make them key players in the natural world.


As the top predators of many of the world's food chains (sharks and killer whales take over in the seas), the big cats help to maintain the appropriate size of populations of smaller predators, like foxes and coyotes, as well as herbivores, such as deer or antelope.

However, their great size and carnivorous diet mean that they need a lot of food, which in turn means they need to roam across large areas to find enough of it.

This week's big cat news highlighted a study by researchers at Duke University that African lions have lost roughly 75% of their habitat over the past 50 years, and that their population has fallen from 100,000 to just 32,000. For those of us who imagine vast African savannas swarming with large animals, all living in fear of lions, this is shocking news. 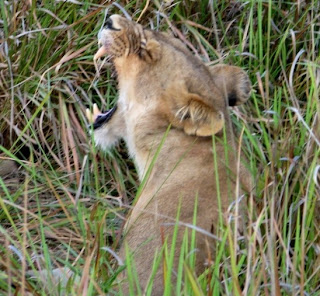 What happened to this ecosystem that once was a third larger than the continental US? As human populations have grown rapidly across Africa (and the world, of course), people have divided and degraded most of the original forest and savanna so that remaining lion populations are isolated and surrounded by farmland and other human activities.

Have a look at this National Geographic site for maps and details on lion populations across Africa, how the researchers determined the changes in habitat and lion populations (using both high-tech and low-tech methods), and what future we might expect for lions.

Tigers have had an even tougher time than lions. They live in Asia, where human population densities have grown far higher than those in Africa. They are also hunted for skins (think British hunters in India)

This excellent video from World Wildlife Fund shows why, despite the continued hunting of tigers for their fur and bones (Chinese medicine - and wrongly thought to be an aphrodesiac), we can still save tigers:

You can find out more about big cats in the wild from the NatGeo site or the Wildlife Conservation Society big cats web page.

Also, I spent several years working as part of a research project on big cats and other great animals in the Amazon, so check back here for more on big cats in future posts!