Born to run, part I: history

This example of persistence hunting, documented in BBC’s Life of Mammals, is an anomaly in today’s easy-access world of packaged food and neighborhood supermarkets. 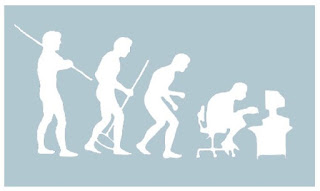 Nevertheless, it was a far more common and (at the time) efficient hunting strategy among our early ancestors, despite the danger and physical effort required.

Genetic and anthropological research in Africa, described in part by blogger Yann Klimentidis, has shown support for the persistence hunting hypothesis.

Though modern work environments hardly require it, you are, despite your current desk job or Facebook addiction, designed for endurance running.

For more on persistence hunting and its role in improving (biological) fitness, read on!

Way back in 1984, David Carrier and colleagues, in their paper “The energetic paradox of human running and hominid evolution,” published in the journal Current Anthropology, considered how humans move, breathe and release heat, compared to other animals, and suggested that running may have played a key role in human survival and eventual evolution.

At that time, new technologies - such as cushioned and motion-control shoes to maximize comfort and prevent overpronation - rather than stride and gait, were the hot topics for runners. The 2009 book Born to Run by Christopher McDougall, re-invigorated interest and debate in both proper running form and our species’ early reliance on running for survival.

I know, prehistory is fascinating, but, you ask, what does that have to do with you and me?

Tune in to the next post (on running form) to find out!