Bicycle commuting: fitness for you and for the world 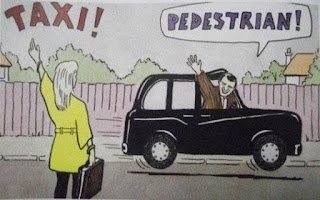 Leave when you want to?

Bicycle commuting may be for you! 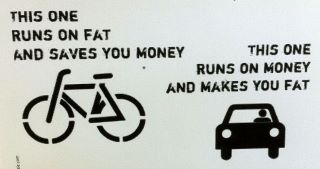 You get in a workout before you even arrive at work, which wakes up both body and mind, and may make your time at the office more productive.

Commuting by bike may improve your mental wellbeing as well by adding some fun to your workday!

On days in which people exercise, their time, stress, and workload management, as well as their mental performance, appears to improve. For a long-term perspective on health benefits, see below:

Cool gear
Some bike commuters simply wear their work outfits, while others make the ride wearing any number of cool, shiny, tight-fitting biking shirts and shorts. While clearly not required, these items keep you drier and more comfortable when riding. Plus, they might motivate you to bike more often, which, in turn, saves you having to buy and burn gas for your commute.

Danish statistics show that every 6 miles biked instead of driven saves 3 1/2 pounds of carbon dioxide emissions and 9 cents in health care costs. But many cite happiness among the chief benefits of bicycle commuting - they feel better after biking.

Less than 1% of Americans bike to work (compared to 76% that drive to work alone), though up to 6% of residents of Portland, Oregon commute by bike. Other US city bike commuter percentages: 3.0% of commuters in San Francisco, 2.2% in Philadelphia and Washington D.C, and just 0.6% in New York City. Small cities in which bikes may get around faster than cars are logical places for bike commuters

Take the windy path
I enjoyed my daily cycle to my office while studying in the UK and grew more relaxed driving on the left side of the road there. Cycling allowed me to zoom from my front door right to my building, and from my building to shops (or pubs) across town, sometimes using a cycle/pedestrian bridge or other pathways unavailable to cars. Once downtown, parking a bicycle was noticeably easier and cheaper than finding a spot to park a car.

Until recently, cycling was the main mode of transport in Beijing and other Asian cities, but they are becoming increasingly dominated by cars, with the associated dense traffic and pollution. A University of British Columbia professor studying cycling in Beijing found that bicycle use in Beijing dropped from around 60% in 1986 to 17% in 2010, while car use has been growing at 15% per year. Trading one's bike for a car symbolizes arrival in the middle class, which is important enough now in China for people to buy expensive and cruelly and illegally-harvested ivory, so it is a trend to pay attention to.

Limitations
Of course not everyone can cycle to work – extremes of weather, distance, equipment needed, and road conditions all hinder the would-be bike commuter. I’m currently living in Bangkok, where I would be terrified to ride a bicycle to work.

The traffic on any large street is always choked up and often intolerable, and it includes drivers that create lanes where there are none.
Roads that resemble parking lots most hours of the work day goad motorcyclists into creating their own 3 distinct mini-lanes: one between the curb and car in the left lane, one between the left and right lanes, and one between the right lane and center line of the road.

BTW, despite their sometimes creative or daredevil use of the road, taxi drivers in Bangkok are generally a decent and easygoing sort. (Plus they almost always have proper change and will usually offer it. The first driver that lacked change of 100 baht (about US$3) let me go without paying, rather than take more than the fare. A long-time Thai expat suggested that maybe the driver was improving his karma by being generous).

Get started
There are some fun and informative websites out there with tips for all aspects of bike commuting, so I won't duplicate those here. To start commuting by bike or for more information, try one or more of these: 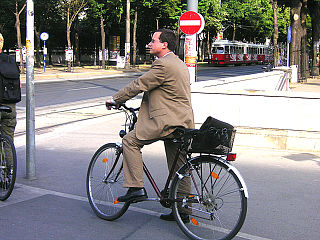 For a long-term perspective on health benefits of bike commuting, an academic study (in the journal Environmental Health Perspectives) attempted to determine quantitatively whether the health benefits of using a bicycle instead of a car for short trips outweighed the health risks (mainly pollution & accidents).

Do you have some motivational (or funny) commuting tips or stories?